Chicago is home to some of the country’s most storied professional sports teams, many of which have been around since the early days of their respective sports. As such, the stadiums that they call home are some of the most historic in the country. If the walls could talk they would tell legendary tales of championship games won and lost, hall of fame players, epic rivalry games, and some of the most diehard fans on the planet. Soldier Field, the home turf of the National Football League’s Chicago Bears is no exception. While visiting the Windy City, you can take a tour of this famed stadium or visit the grounds to get a feel for what a Chicago Bears game day is all about. If you happen to be visiting the University of Chicago The Best Western Plus Hyde Park during the NFL football season, consider yourself one of the lucky ones and do yourself a favor by catching a Bears game at Soldier Field during your stay.

While designed in 1919, the stadium opened five years later in 1924 under the name Municipal Grant Park Stadium. It hosted its first game on October 4th of that same year when Louisville Male High School took on Austin Community Academy High School. One year later the stadium obtained its current designation as Soldier Field to honor all U.S. soldiers who perished in combat and, since then, it has been the home to countless other memories. Since its creation Soldier Field has hosted the first ever Special Olympics Games, a wartime presidential visit by Franklin Roosevelt, and a plethora of large-scale concerts. Most recently, in 2015, the stadium hosted the surviving members of the Grateful Dead in celebration of their 50th Anniversary – a fitting tribute as the band officially played their last concert here in the summer of 1995.

The stadium itself was renovated in 2002, with the interior being mostly demolished, rebuilt, and modernized. While it is no longer a national landmark because of said renovations, the modern feel and look are a welcome change to many Soldier Field regulars. Still, this structure stands as the oldest stadium in the National Football League.

Soldier Field is as much a part of Chicago as deep-dish pizza, the Willis (formerly Sears) Tower, or The Bean in Millennium Park. If you are chasing the true Chicago experience during your stay with the University of Chicago The Best Western Plus Hyde Park, do not pass up a chance to pay Soldier Field a visit. Check with our front desk staff to see what may be happening at this storied stadium during your stay. From Chicago Bears professional football games to world-class concerts, Soldier Field is a one of a kind stadium worth a visit. 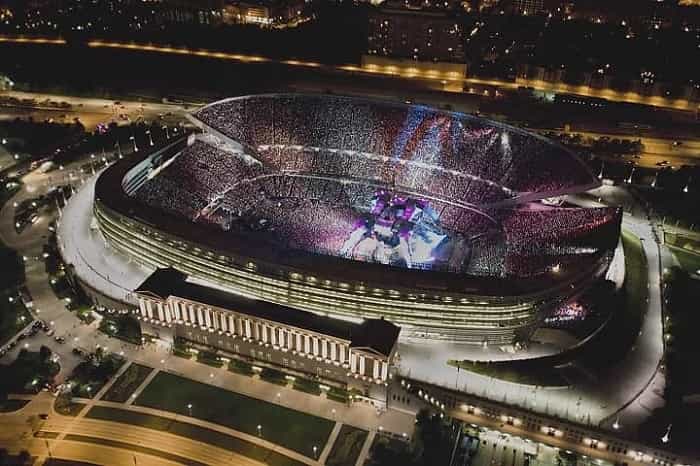